Being a part of this interactive project has been amazing for me! I have had the wonderful opportunity to meet local Somali trailblazers from Columbus. Hearing their stories alongside mine has brought a positive light to our community and I believe it’s changing the narrative. Sometimes when people hear  “Somali community”, an inaccurate idea that Somalis are a group of uneducated and insular people may form in their heads.

However, an opportunity to engage with a project like UDDA might give them more insight to see Somalis as key players in the Columbus community through their contributions such as entrepreneurship.

When I was first involved in the project, I was in the process of creating a group called Somali Political Action Group, more commonly known as “SPAG” for short. SPAG’s mission is to help young Somalis educate themselves on voter rights, be active participants during national and local elections and become more engaged in the political community of central Ohio.

We have done many great incentives within SPAG such as hosting over 10 community conversations, raising over $13,000 for famine relief in Somalia and bridging the gap between local elected officials and the Somali community. We are now in the process of supporting one of our own members, Ismail Mohamed, with a campaign for office! We have also been involved and active on local, state and federal elections including recent presidential election, where our SPAG members actually had the opportunity to meet with presidential candidate Hillary Clinton. 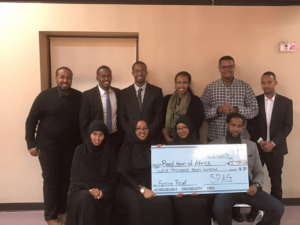 I have also had the opportunity to do an internship with local city council member, Shannon Harding and also now currently work as a public information specialist and Somali liaison for the Franklin County Sheriff’s office. With my new role, I have more access to community engagement. My position allows me to provide support and mediation between my Somali community and law enforcement.

I was also chosen to be a fellow with New Leadership Council and will work on a six month capstone project to help make Ohio more progressive. I hope to focus on economic engagement within New American community and look at our state policy and funding in order to see how it’s helping New Americans start small businesses.